There are really only two reasons to go to Uyuni: because you are sent there to work for a mine, or because you are touring the Salar and associated sights (see pictures here) and this is your jumping off point. It’s a shock to the system to land there unprepared. Sand is everywhere. A wind blows from far away and has no intention of stopping. It’s hot and dry in the sun and cold and dry in the shade. The food is blah, the scenery is sand-beige (except for the colorful skirts and mantels of women in traditional Aymara dress), and everything is overpriced, because everyone is trapped.

But Uyuni has a saving grace: the train cemetery.

While I appreciate that not everyone shares my love of a good cemetery, and maybe not my untested, purely nostalgic adoration of trains (we’ll see if I get over that in Vietnam, Morocco, or Europe…), surely most of you must agree that a train cemetery is a sight behold . If for no other reason than because it is like an adult playground for the tetanus-saavy.

Depending on to whom you speak, the origin of the cemetery is different, and I don’t know who holds the truth. Lonely Planet says the rusty, lopsided, off-track steam engines and boxcars date back to the 18th century, when there was a steam car factory in Uyuni. Wikipedia notes the name of the town itself, which wasn’t founded until the late 19th century, means, ‘the one with the pen/cemetery,” and holds to the more likely explanation for the train junkyard: Uyuni served as a distribution center for trains carrying minerals from Bolivia to the coast, starting in the late 1880s and collapsing suddenly in the 1940s due to mineral depletion.  Train cars and their engines, no longer used and suffering from exposure to, among other things, the massive amount of salt that is still harvested locally, were pulled away from the town to rot in this glorious, colorful, ghostly pile.

I had planned on walking out to the cementerio in the late afternoon, but quickly realized that, other than about four main routes in town covered in cobblestone, the rest of the roads – and I use that term loosely – in Uyuni are unpaved sand trails. Sometimes, they are nothing more than tire-worn ruts in the desert. It was completely unclear to me which way I should go, so I grabbed a cab and asked it to take me there and wait fifteen minutes, while I explored.

Needless to say, I feel instantly in love. I had the place to myself, and late afternoon light added to the eerie beauty of this bizarre hallmark of a history potentially repeating. Uyuni is the closest city to one of the largest lithium fields on earth, which is actively being mined to charge our cell phones, cameras, and computers. It may only be a matter of time before trains are once again pulling minerals to the coast.

My cab driver thought I was a bit nuts for liking this. He doesn’t understand why tourists, many of whom showed up on their way back from Salar tours while I was still exploring, would want to see ‘junk.’ I don’t know if I explained it to him in any rational way. I told him in the US, we can’t do this; we are prevented by fences and wires and alarms. And fear. But as the days of our tour went on, I realized part of it is that as people, we just like to climb on things, and as adults, we do it far too seldom.

If traveling by train is more your style than climbing on one, you can still hop on board and make it as far as Oruro, or head toward Chile. But the truth is, wherever you take the train from here, you are likely to need to follow up with a bus or a plane, so I stuck to playing around these great spirits of a former life. 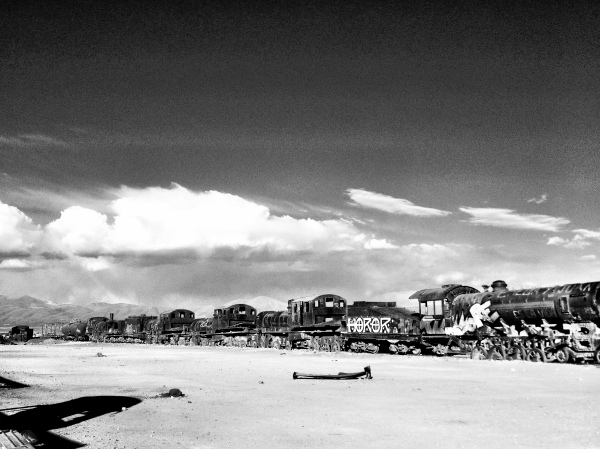