People keep asking me how I like LA. Or how I came to be here. Or if I think I’m staying.

I, myself, barely remember that I am here lately. This is the first weekend in 7 weeks that I’ve slept in my own zip code, and between those weekends, I’ve been working a good number of 11- and 12-hour days at the office. In weeks like that, does it matter where one lives?

And yet it does. Because where else but LA could you take four pieces of art that have been sitting in your apartment, patiently awaiting frames for a year, to finally get the love they deserve, and end up taking the dog for a walk in that ultimate commitment to never leaving LA: Hollywood Forever Cemetery?

Tucked between the Paramount lot and Santa Monica Blvd, with a clear view of the infamous Hollywood sign on most days, Hollywood Forever Cemetery has a little of something to love from every corner of this city. There are Russian Orthodox here, and Russian Jews, and German Jews, and just plain Jewish Jews. I would imagine there are some just plain Russians and Germans and Chinese and Japanese and Vietnamese and Italians and maybe some Brits and people of other sorts, but I didn’t happen upon their individual ‘neighborhoods.’ There’s a Jewish mausoleum and a Catholic mausoleum and a giant empty space of mausoleum waiting to be filled with anyone ready to commit to whatever Hollywood brings on. 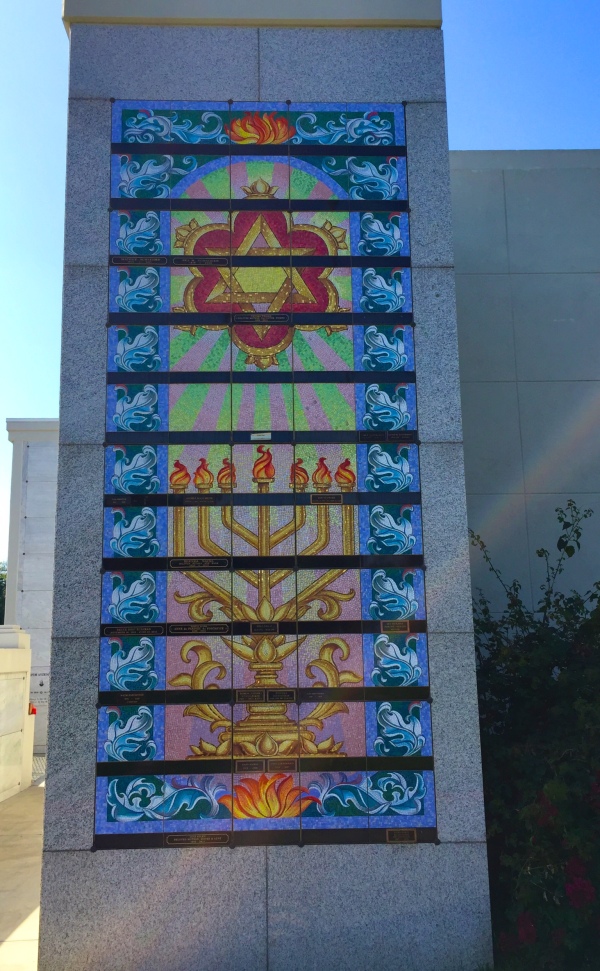 On a sunny Saturday that threatened to heat up, numerous palm trees and other deciduous arboreal delights provided ample shade and some wandering space for the dog. Like the rest of LA, the cemetery is absurdly dog-friendly. Of course it is – it’s the eternal home of Toto.

The grass is pleasingly unkempt; the cemetery (unlike LA) is not overly-coiffed. Its natural irregularity is inviting, and I was tempted to wander through the crowded rows of tombstones on a plush offroad journey. But I was informed by a friendly but firm security guard that dogs must stay off the grass. The reason, he pointed out from his seat on an official golf cart, is because the graves and some of their stones ride right up against the curb in a significant portion of the park.

The stones are worthy of their own rolling credits. It’s not the people who lie within or beneath them – though there is a Golden Age of Hollywood Who’s Who list buried here – it’s the pure variety of the stones themselves. They are stones the size of ledger paper. There are stones flush to the ground. There are stones the size of coffins, and stones that are sarcophagi; stones engraved with the symbols of Masons and Oddfellows, Stars of David and Coptic crosses, and things I’ve never seen before. There are family plots that are monuments themselves; there are crypts and obelisks and something that looks like a cross between a real pyramid and a pyramid you’d find on the Vegas Strip, but of course, this is Hollywood, and what is Vegas but a variation on that theme? 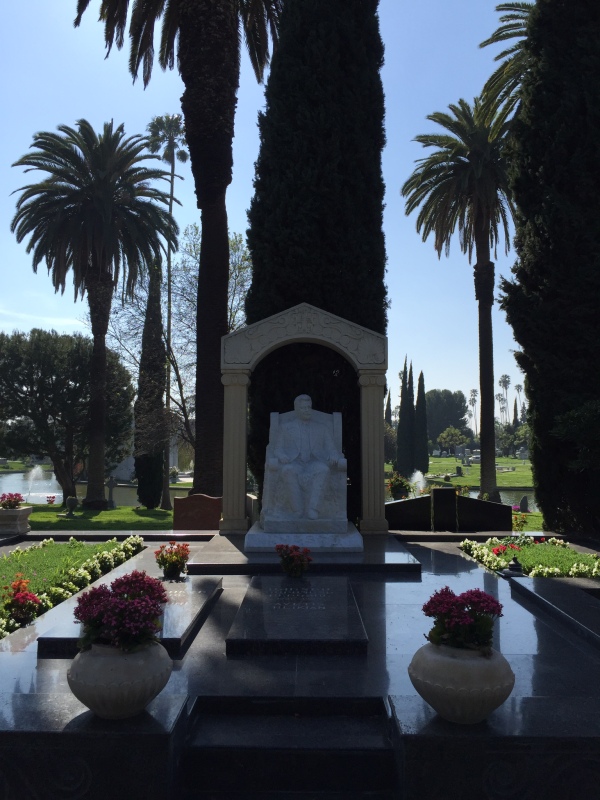 There are homages here. To mothers, and sons, to brothers and daughters and great grandparents ‘united in eternity’ side by side, their portraits etched in granite above them.

There are artists and actors and singers and writers and producers and directors and normal Joe’s. There are granddaughters now walking with canes and aided by great granddaughters carrying picnics to visit family members on a sunny afternoon. There are mourners gathered, and empty chairs set up awaiting more. And there are tourists – foreign and domestic, and local, like myself, wandering through a local past and wondering about the future. It’s a village of passed souls breathing a little life to those of us still walking above them, looking up at the palm trees and blue sky, and wondering how we got to this incredible place.

I’ve never been much of one for Halloween. But next year, I’m celebrating Purim.

I know they are totally unrelated holidays, one about paganism and the other the triumph of a people over oppression. But they are celebrated in very similar ways: costumes and candy. Let me leave my sugar addiction out of this and focus on the costumes.

I’ve never been much of one for dressing up in a costume. Maybe it’s the pressure of creating the complete alter persona, when my personal persona already felt like an act. Maybe it’s the act of acting, which seemed disingenuous. It could be the subtle but persistent undercurrent that “slut” was the way to go – was it the easy way out? Was it a latent desire to be slutty? Maybe it was the tension between my inner feminist and my inner fun-lover that never liked looking that one in the eye. Maybe it’s nothing more than a simple lack of creativity.

I took a break of more than a decade between Halloween costumes. Between my first year in grad school – when I hastily ironed glitter letters spelling “Princess” on a black t-shirt and donned it with a tiara to hit 6th Street in Austin: 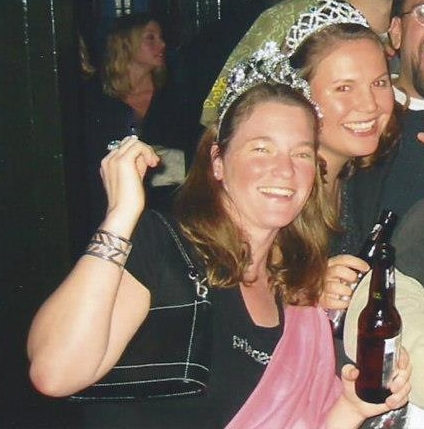 – and my last year in Dallas when I got caught up in the infectious spirit of friends who live for Halloween and Mardi-Gras, and told me I wasn’t allowed to their annual party without a costume, which sent me on a spiral of craftivity that resulted in a “Toddlers in Tiaras” getup

(a failed one, I confess – most people thought I was just trying to be a beauty queen), I spent most Halloweens pretending not to be home.

I marvel at pictures of my friends who go all out for these occasions, and I can’t get there. Is it competition? Is it confidence? Whatever it is, Purim is sucking me in.

I live in Hancock Park, a neighborhood of Los Angeles that is predominately Jewish. Very Jewish. Forelocks and overcoats and wigs on the women Jewish. Families walking to temple on Fridays and kosher grocery closed on Saturday Jewish. Last night, the world erupted in firecrackers that sent my dog running under the couch, trembling. And this morning, the world is alive in costumes.

In the two miles I just walked, I must have passed 100 people in costume. Only one was dressed like a cheerleader. None was dressed as a slutty nurse. Many were clowns with rainbow hair. One young boy was dressed as a fat yuppie, stuffing overflowing around his belly so that his plaid shirt bulged above the belt holding up khaki pants, and a false butt bugged out beneath them. I saw an astronaut, a ninja, a baker, and an Haredi who had rainbow-striped his shtreimel (his big, round, fur hat, disrespectfully analogized to a lampshade – see below), so that it looked as if he wore a circus tent on his head. The award-winner, to me, was a group of five multi-aged siblings dressed as newsboys from the 30s, complete with knickers and caps. That is, not counting the Mustang convertible of young men in kippas that I saw pulling out of a temple parking lot – but I think that just happened to be how they were rolling this morning. 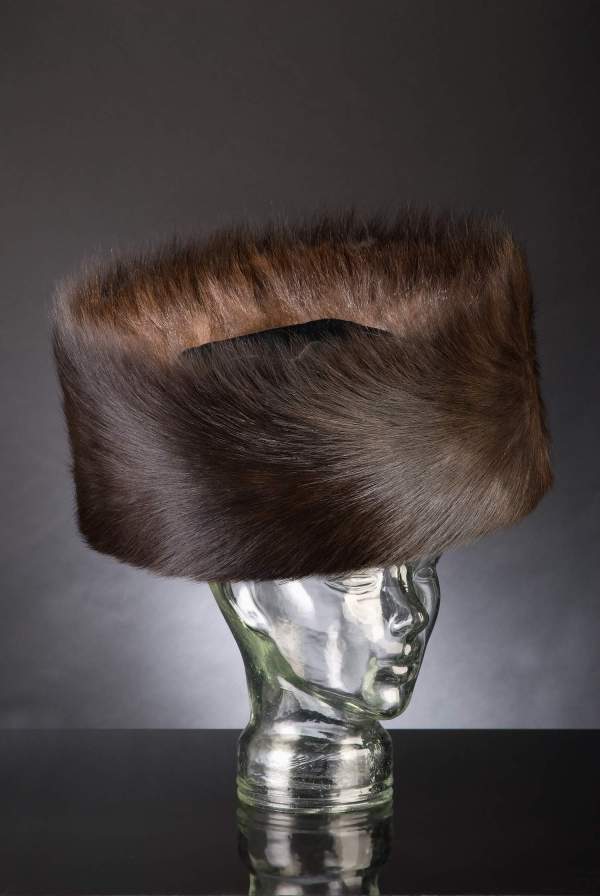 Because today is a holiday, all these young people were out in the neighborhood, many going between two bounce houses set up on the front yards of their apartment complexes. Remnants of confetti lie on the sidewalk, sparkling in the morning sun, and boys run around blowing plastic horns. It is a holiday about joy, and creativity, and perseverance. It is a holiday that celebrates one woman, her honesty and her bravery. And maybe some revenge.

I’m not sure whether it’s the creativity, the community, or the history of Purim that has me intrigued, but I’m already contemplating outfits for next year. And French maid is not among them.