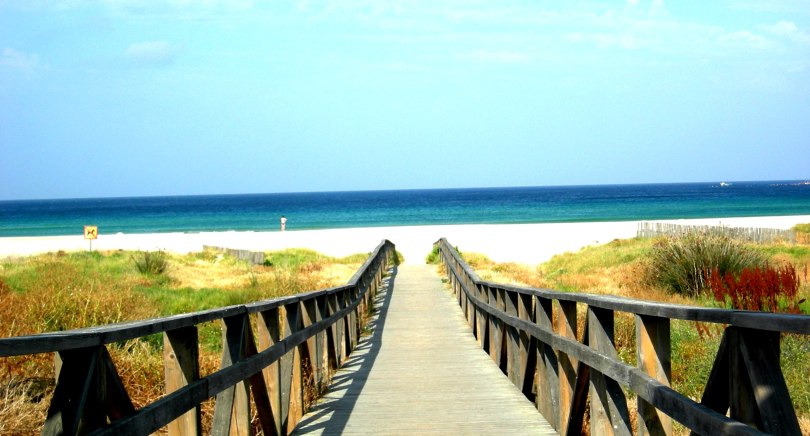 I had been saving a visit to the Alhambra, my only tourism goal of this return to Spain, for the week my Myanmar Travel Companion (MTC) came down from Germany for a visit. Like me, he traveled for an extended time, but he stayed in Southeast Asia, diving and staring at the ocean from Southern Thailand and Malaysia, or partying in Bangkok and Saigon. He left around New Years to return to Germany, and promptly got a string of illnesses clearly caused by post-travel depression, cold weather, and office work.

So when MTC arrived in Sevilla, agitated, irritated, unable to relax or appreciate the sights of Sevilla, I was more than happy to go along with his desire to visit Tarifa, a beach town on the South Coast known for its kite boarding and wind surfing. I would have done anything to uncover the MTC I knew in Myanmar, who gleefully biked through the backroads of Bagan and laughed at the fiasco in which collectors were sent for me on a temple at sunrise . We devised a grand plan: rent a car, head south, spend one night at the beach and then head northeast to Grenada to see the Alhambra.

Of course we got lost driving out of Sevilla, trapped on the ringroad that circles the city, and drove back and forth in a pendulum’s arc around the bottom of the loop before grabbing hold of the road southward. An hour later, down the tollway lined with eucalyptus and divided in the center with oleander, the sides of the road opened. Rows of blooming girasoles tipped their hats to us as we sped by. Above their yellow faces, wind turbines topped rocky hills, turning with increasing fury as we headed south to the sea.

We checked into the hotel and then headed to the water, the approach to which wasn’t obvious. We got tangled behind some apartment buildings, a soccer field, the Chinese ‘everything for a euro (and up)’ store, and crawled out through a parking lot dotted with camper vans from years long gone, missing paint, plastered with peeling stickers. And then, there we were, next to the magnificent Atlantic, which looked like the gentle Carribean for that day only. The water was in turns clear, then turquoise, then increasingly blue as it pulled out to the sea like the tankers we could see, leaving the safety of the Mediterranean for destinations West, and South.

It was still hot, being no later than five and Tarifa at a latitude where, mid-June, the sun sets between 9:30 and 10:00 pm. Tourists baked on the sand, feigning interest in shade with small sombrillas and fading coats of sunblock. Couples played in the water, waves poured in, kids built castles in the sand. We took off our shoes and walked almost an hour up the beach before turning back in search of beer, and food.

For dinner, we headed to the other gem of Tarifa: the medina. This was no Moroccan medina. The buildings were white-washed, storefronts wide, and streets clean. Streets that may have once been cobblestone wove through one another around buildings filled with Moroccan jewelry and textiles priced well above their native prices plus the 70 euro ferry trip to Tangier and back. Some sold clothes, others beachtowels with the toro de Espana, others peddled beer to young tourists from Australia, England, and Italy who were here to surf, or pretend that they could. The streets dumped us out next to the Catedral at the bottom of the hill and we looped around it, looking for a way in before giving up and heading to a vegetarian place with four tables.

Like sports towns everywhere, Tarifa is populated by people whose faces have been carved by the weather, the wind shaping their existence as much as it does the line of the shore. They move with a slowness that, even in Spain, is marked by a lack of urgency, a calm that comes with low wages and high levels of activity in something you love, and a tolerance for tourists you accommodate for your survival. People who live in towns like this know the reasons they are here. They aren’t on the search for something they may never find.

In contrast, the MTC and I spend more than half our conversation time trying to ascertain what magnificent, million-euro idea two pedigreed, intelligent, well-traveled individuals can come up with so that we can travel six months of the year. Before we finish dinner, we decide we are skipping the Alhambra and staying here.

The next day breaks so windy that our morning walk on the beach is a sandblasting the likes of which a good hammam could charge a pretty dirham for. Sand from the dry part of the beach races to the ocean, flying across the wet pack to the waves, which appear to turn in slow motion as the wind pushes spray backward off their tops. The neon orange floats that line offshore fishing nets bounce on the water, as do the boats that yesterday so stoically guarded their fish. Our walk is shorter this morning than it was last night.

We hop in the car and go looking for a beach to sit on. We find perfection ten minutes down the road, at a hotel that is simultaneously expensive and filled with kite boarders and wind surfers. It is tucked into a hillside with a patio partially protected from the wind. We luck into a couple of basket chairs and take them, lounging for hours beneath a partially thatched covering that attempts to shield us from the sun’s heat. Sometimes we are reading, but more than once I catch each of us staring into space, trying to figure it all out. And of course, more than once, I catch each of us checking out a hot Spaniard setting up his board. Eventually the sun burns us out of our seats, and we move to the restaurant where we share tomato salad with salt flakes, and fall asleep on the banquet in the shade.

After a brief siesta back at our hotel, we drop into the grocery for beer and head to the beach for sunset. Of course, the sun doesn’t set until 9:30 and after ten minutes, the pockets of my shorts and the can from my beer are filled with sand, shoved there by a mischievous wind, so we head to the beach bar just before the poprt. After the sun goes down, all we feel is the wind, and suddenly it is cold. We race back to the hotel through the winding streets of the medina, shivering and laughing at the change in ambiente, to shower and go to dinner. 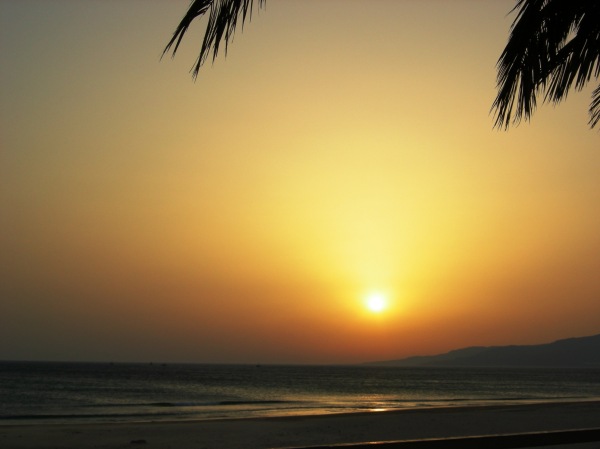 On our last morning, the wind is as fierce as it was the day before. It has roared all night, lulling me into sleep through the open window. We detour up the coast for our return trip, driving along a highway that winds through a state park, where wind-molded pinons umbrella over the land. We stop for lunch on the coast, feasting on grilled vegetables and fish before heading home. 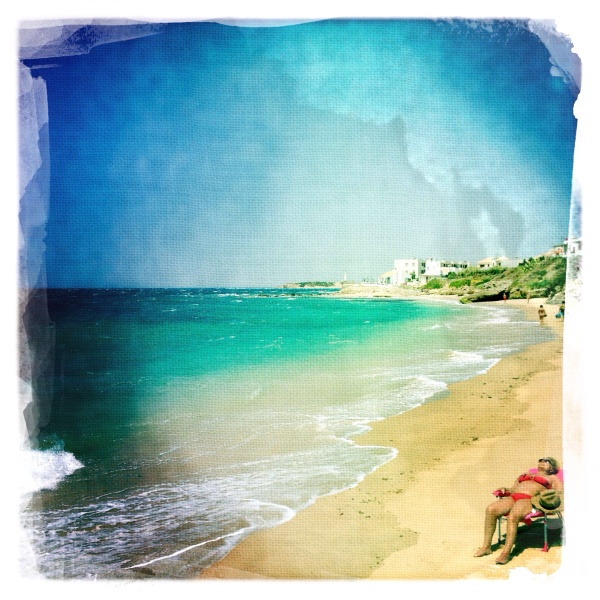 When we return to Sevilla, we leave the car at the train station and grab a cab to my apartment. The heat is heavy here, compared to the coast. Tomorrow, it will be 102. The next day, 104. But we have been scraped clean by the salt, by the sand, by the persistence of our concerns about the future. The wind has carved us, if only slightly, leaving us with our true faces and carrying off the ones we wear to convince the world we are where we need to be.