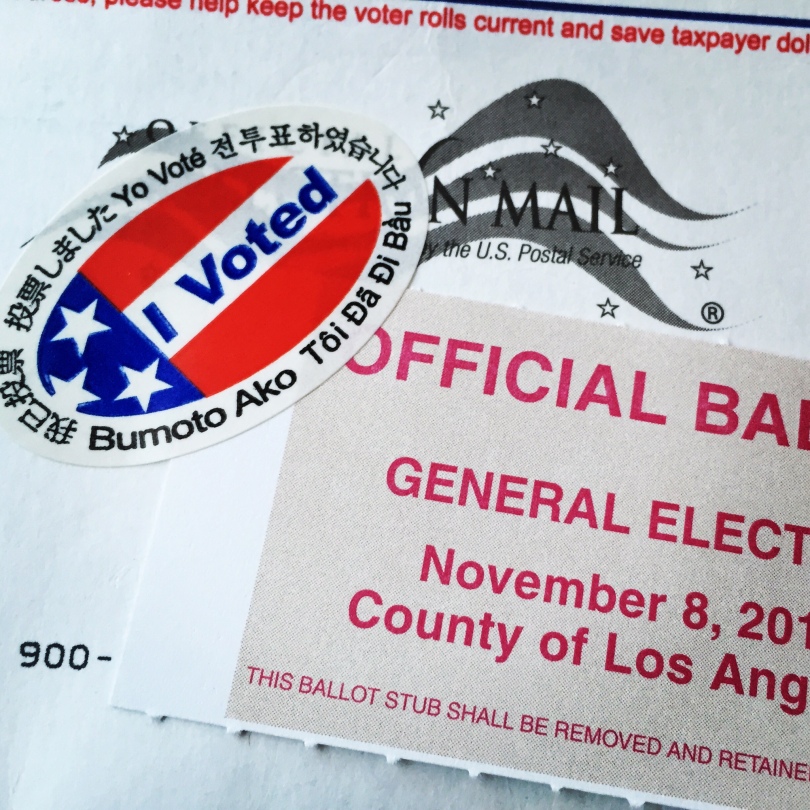 In the past ten days, I’ve lost a leather bound book in which I’ve tracked almost two decades of road trip expenses (likely on the ground of an Oregon rest stop, having fallen out the car door pocket); a drawstring bag with a couple favorite pair of earrings (mysteriously disappeared between Washington and LA, not a trace to be found); and all hope for the future of the USA.

This last one fled sometime around 7 pm PDT on Tuesday, November 8th, and I’m genuinely not sure where it went or how to get it back.

I woke up Wednesday disheartened, and fearful; in a state of disbelief but not wonder. I couldn’t listen to the news. I made one facebook post and haven’t looked since. After all, what spewed forth was predictable: finger pointing, intellectualist blame-naming, mostly directed at the nameless “them” in the middle of the country. It’s where we go (“we,” the liberal, intellectual-elite, coastal inhabitants) when we want to call out what is broken and whose fault it is, whose responsibility to fix it. How were the polls wrong? How did we miss this?

We missed it the way “we” always do: by ignoring an ugliness we aren’t sure how to handle. Democracy is not about the “I.” It is – more than almost any other thing we have – it is about the, “we.” WE the people. We all bear responsibility for what happened this year, in some shape or form.

So please don’t turn to a fellow who voted for a third party candidate and say, “this is your fault.” It isn’t. That person did precisely what that person is meant to do: voted for the candidate that best spoke to his or her needs or ideals, who made him feel heard and represented in a political system that makes most of us feel ignored.

Please don’t ask, “where did these hateful people come from,” as if they have been on another planet and just landed on earth in time to register and vote. If you do not know where this faction of voters comes from, you have been surrounding yourself only by those who agree with you, and ignoring all uncomfortable hard evidence that this hatred has been brewing for decades.

After all, this is America. We had institutionalized slavery until 150 years ago. We’ve yet to hit a century of women having the legal right to vote. It’s not been 50 years since we sprayed our citizens with fire hoses and beat them with clubs for nothing other than the color of their skin, an epidemic of violence “we” justified with fake science and mislead religious order. We still seem to shoot a similar cohort regularly, with no cause, and hold no one accountable.

We all bear responsibility. When you have ignored those who feel dispossessed, excommunicated, robbed of a power they were raised to believe was their right, they will find a way to take it back. When you ask how this hasn’t happened to our many communities of color, the answer is: because they haven’t had that power yet, here. The fight for power in the first place is a different fight than the one tinged with revenge – the fight to get back what you feel has been ‘taken’ from you.

I am not validating the behavior. I am not accommodating the revenge. Not aligning with the bigotry and selfishness that characterize the candidate who has become our president-elect, or the small minded hatred of those who brought him to office. I am merely saying this: please don’t move to Canada. We need you to help us fix this.

Please don’t move to Canada. Move closer to your neighbor. Find someone to hug if that helps. When the news dies down, find a cause, and dig in. This is OUR country. Democracy, as they say, is not a spectator sport. When you are ready to join in, let us stand together, roll up our sleeves, and do the important work of rebuilding this democracy so that the dispossessed we left out in the first place are empowered. Let us rebuild ourselves more graceful, more welcoming than we were before, and let us do it together in the face of this adversity. When someone looks in your direction and says, “love it or leave it,” smile and say, “I love it, so I fix it.”