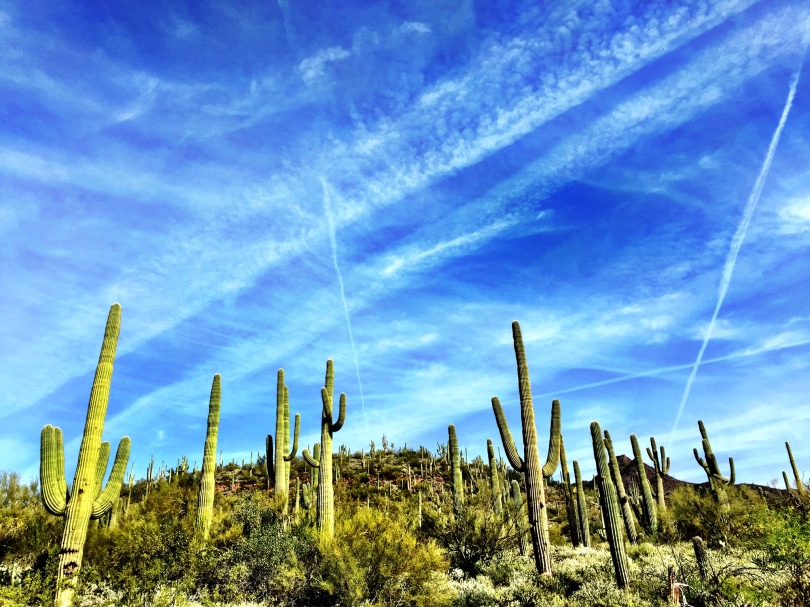 I’ve been thinking a lot lately about the importance of feeling small. We tend to think of it as a bad thing: feeling “less than” others. Feeling unimportant. Feeling hidden. But there is another aspect of feeling small. The one that allows you to feel the mighty wonder of something else. To feel small against it, and in relation, to feel its power, and relocate our own.

I suppose this may sound like a religious sentiment, and ironically, I’m writing this on Easter. But I’m not a religious person. I get my feeling small from being out in nature, and I love it.

I started contemplating feeling small in October, when I was traveling through Utah. Newly reunited with the dog after a year of separation, I was generally gleeful, and grateful, but I was also venturing to a new territory and a major life change: living in LA, looking for a job, staying in one place.

Spanky and I set out on a couple of hikes – two in Goblin Valley State Park – in Little Wild Horse Canyon, where we had to stop after a mile or so because poor Spanky couldn’t scale the narrow sandstone walls, and out the Curtis Bench Trail, where we wandered among hoodoos and I contemplated how similar they were to the fairy chimneys of Cappadoccia, and marveled at the amazing things that Nature creates. The next day found us in Escalante, heading toward Lower Calf Creek Falls on a sandy trail through a valley where fall foliage danced in the sun. Turning a corner the last quarter mile before the falls, the temperature dropped at least fifteen degrees and we were met with a cool wind, and then a misty spray, and then the falls themselves, rising 100 feet up a cliff of reddish rock. We stood small against it, had our picture taken, lapped the cool water, and wandered back toward the car tired, happy, refreshed. 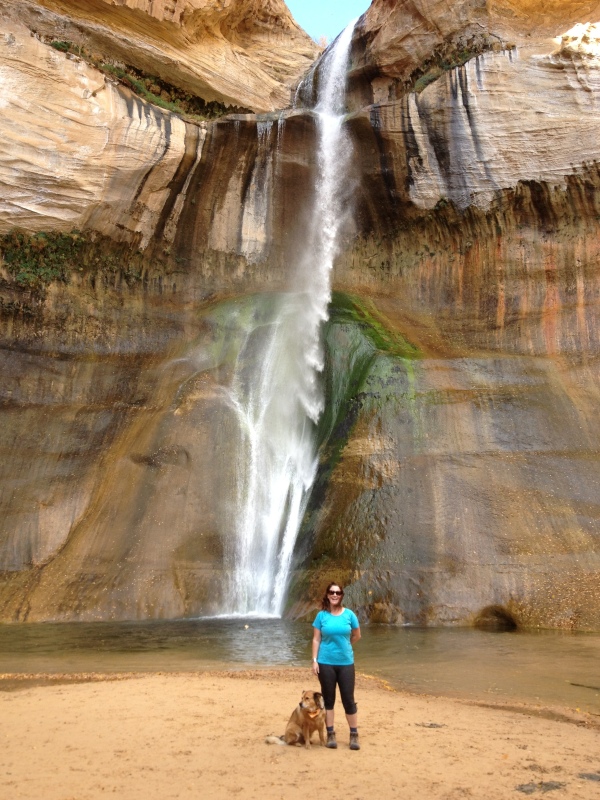 From there, we made our way to Devil’s Playground to watch the sun set. The unpaved Hole In the Rock Road stretched ten washboarded miles into unblemished Utah, depositing us in a playground of rock formations that look almost like sand towers and the waves that break them. Spanky was nursing a bloody foot pad from two excited days of pantering through the sand, so we kept our wandering to a minimum. I sat him in a stay while I climbed around and recalled with joy the sense of adventure I’d had all over the world at similar sights – formations of natural origin so astounding in sight they seem otherworldly, which reminds me, always, how magical the world really is. And the lookout from that place, out on a valley of alien sights, familiar to me because I had seen something similar a world away, and new and strange here in my own country, made me feel so wonderfully small, so thankfully little in comparison to the magical mastery that is Nature. 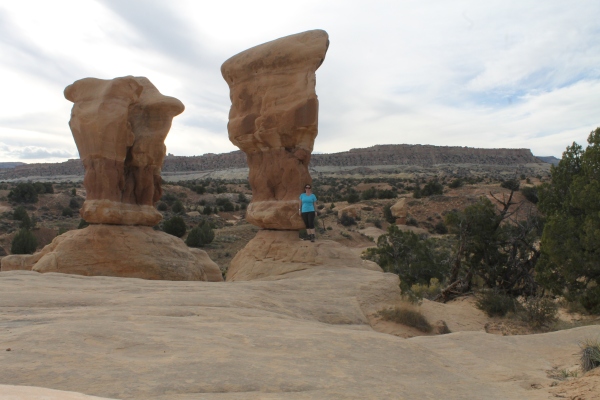 This week, today, April 5th, marks one year since I flew back into the United States, after visiting 17 other countries. Lately, in Los Angeles, looking for the place where I fit and the job that I can both master and enjoy, I have on occasion felt small in the bad way. The way that makes one feel inconsequential, unnoticed, not fully worthy of the wonder that surrounds and as a consequence, less capable of seeing it, even right there in front of me. It is a great reminder to put myself in the place where I feel blissfully small, and so it happily coincided with plans to hit the road.

Which is how I found myself in Joshua Tree National Park for the first time. Dogs are not allowed on trails in the National Parks, so Spanky and I wandered on dirt roads around Hidden Valley, again staring up in wonder at stone formations – Intersection Rock, of climbing fame, and Skull Rock, of tourist fame. We drove south to the 10 through the cholla patch, the cactus flowering around us, the sacred datura blooming in treacherous, ostentatious piles by the road side. The ocotillo waved red paintbrushes up at the sky. And the Joshua Trees, of course, scratched up at its surface. 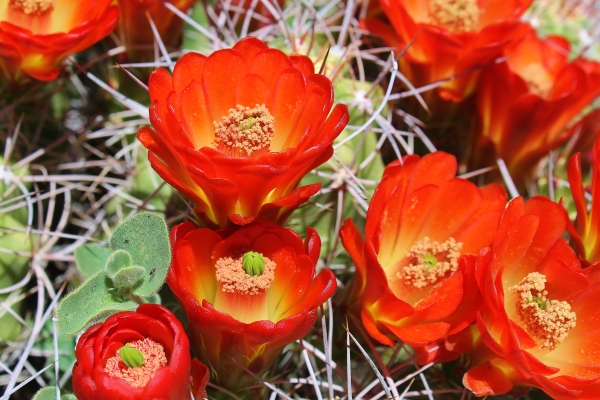 And then here, to what could easily be considered a Phoenix suburb, where an easy morning hike puts you up against a hillside of cordon cactus, one of which is older than my great grandfather would be, were he still alive. . And 30 feet tall. There was a cautionary rattler sunning itself by the creek, whose watertable is now starting to retreat to its summer home beneath the ground.

At night, the same trail by moonlight has a different face. Cool breeze through the wash, red-spotted toads hopping across the footpath, which you take more slowly in the dim brilliance of the full moon. No headlamp. Just Nature’s magnificence to light your way. And still, you can make out the outline of the giants, standing tall, prickly, resilient among their history, making you feel small in the best of ways. You shrink beneath them, and you feel closer to the ground. Grounded. Your problems less insurmountable. Your place potentially still unsure, but certainly less tenuous. Your place, here. 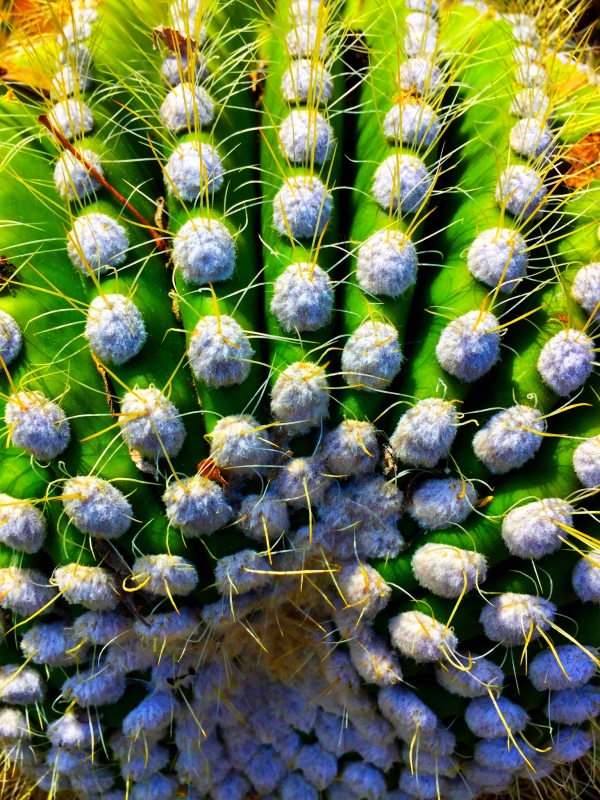