Out the Empty Highway

Cars drive ten miles above the speed limit in the right lane, and are passed on the left by shiny new pickups, courtesy of natural gas money. Everyone pulls left to pass lumbering trucks carrying portable frack water systems. Approaching Sweetwater, wind turbines guard the hilltops, and we are welcomed into town by a blade laid sideways in the median, heralding, “Welcome to Sweetwater, Wind Energy Capital of North America.” The things you don’t know, you will find right out your back door.

This is West Texas*,  in all its earned and rumored glory and ruin. Southwest of Dallas, out I-30, then I-20, and eventually 18, 1776, 67….and FM something-or-other, we’ve passed the bustle of urban environs.  Cement and strip malls give way to low hills dotted with low mesquite. Towns pass by, punctuated by proud water towers bearing their names, and turnoffs for roads named “Noodle Dome” and “Study Butte,” pronounced ‘stew-dee.’ We are in the land of Larry McMurtry, heading for the land of Giant and Judd, abandoned farms and vibrant vineyards, the past and the present mixing together with mutual suspicion.

Beyond the new gasland, pump jacks dot the horizon, feeding like wild metal horses against the land. Some stand still, the oil dried from beneath them, just as the process of collecting this oil has dried the land of the vegetation that used to feed horses and steers. And like those wells, the money from this boom dried up not long after the boom went bust.

Surfing Beneath a Storm Wave on Hwy 1776

Dust tornados dance across empty fields, pushed by a wind that falls down the edge of an oncoming storm. The clouds arrive, and we swim below them like surfers knocked from our boards and waiting for the crashing wave to subside so we can rise again. We ride the tide of wind up one curve and around another. Old sheds shedding their paint pop up to watch us float by.

It is hard not to become nostalgic out here. Nostalgic for something you’ve never known, something that never existed, an idea of America as raw and workable, a place of values and simplicity that, when it did exist, was really a much tougher existence than anyone from the outside ever cares to know. 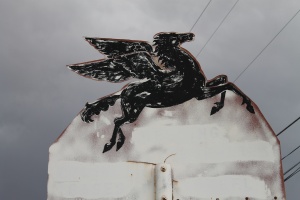 A road trip can do that to you. Removed from your own natural habitat, cities seem more glamorous, countrysides bucolic, and the world can be what you make of it. The air smells different, the light creates unfamiliar contrast. Everything, everyone, is new and interesting. Choose what you see, select the image to take with you as you drive through; leave the reality behind.  The images are romanticized because you don’t really know what’s behind them. When you look at them a year from now, you only know your reality, and not the truth.

Even on road trip lite, less than a one-day drive from home and still in your own state, you are a world away, faced with the same challenge as when you are a two-day flight from home, literally a world away: you are an outsider here. You hop out of your car for gas, for a restroom, to walk the dog, and you smile and make small talk with everyone you see. You love these interactions for the small taste of place they provide, the little local insight. But when you ask outside Abilene what military plane that is that just roared overhead, the veteran from Vietnam knows you aren’t from here. Everyone from here knows the sexy sheen of a B-1 and the sound it makes when it takes off and lands.

You are so outsider that even when you ask the paramedic from Lubbock what brings him out so far, you advertise your urban foreign-ness. Because all the locals know, and all the Lubbock locals, hours away by car, know the only thing that brings an ambulance to Abilene from Lubbock is the child psych ward and its inhabitants.

West Texas – Before, Beside, Behind

*West Texas is not to be confused with West, Texas, which  was recently in the news for an explosion at a fertilizer plant, that killed 15 and leveled 37 buildings. Timed just two days after the Boston Marathon bombing, there were brief concerns that the two were related. Adding to the confusion was that West is the home of a significant community of Czech immigrants, whom the public confused as being the same as Chechens (the origin of the Boston Marathon bombers), so much so that the Czech Ambassador to the US put out a statement clarifying the difference. The cause of the West, Texas explosion was narrowed down to one of three possibilities: a faulty golf cart battery, an electrical system malfunction, or arson.

One thought on “Road Trip Lite”